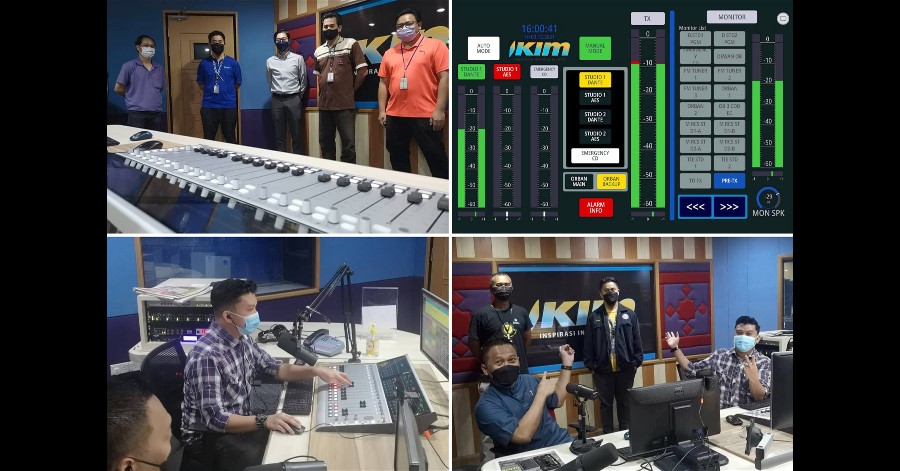 Radio IKIM, Malaysia celebrates its 21st anniversary this year with a major upgrade to the audio production facilities at its studio headquarters in Kuala Lumpur. Launched on July 6th 2001, Radio IKIM is owned and operated by the Institute of Islamic Studies Malaysia. It was the first Islamic radio channel in Malaysia to broadcast 24 hours per day. Transmitted nationwide on FM, Radio IKIM also reaches listeners in Singapore, Indonesia, Brunei and southern Thailand.

"We decided to modernise our production infrastructure after using the previous system for many years," comments Encik Shazril Sopian, IKIM engineering team leader and the head of the upgrade project. "We evaluated a number of technical options and found the DHD SX2 to be the optimal solution. DHD systems are operator-friendly, space-efficient and easy to integrate with third-party equipment. The sound quality is incomparably good. Our staff are very pleased with the DHD user interface, especially the SX2 touch screens which display all the information needed to configure and control signal levels. This is particularly useful during live mixing sessions."

"The SX2 also scores in terms of attention to detail such as assignable buttons linked to adaptive labels in a dedicated display screen as well as the dust-protected faders to the individual channel bar-graphs and main output metering," adds Advon Tan, General Director of Stagetec Asia. "The modularity of the SX2 ensures great versatility in terms of desk layout and makes relocation very straightforward. Linked to the DHD audio system is IKIM Radio's Dante Audio over Internet facility which is managed from the master control room. Dante coding is used on the primary transmission path and AES3 on the secondary path, fully switchable.

A modular mixing console designed for radio and other broadcast applications, the DHD SX2 is is based on a central module with four faders plus a control section including monitoring and talkback. The SX2 series also includes a fader module with six motorised faders. The central control module gives access to the most important audio inputs and outputs. A microphone input and headphone output are also included. Loudspeakers can also be connected directly to this unit. The fader module allows the addition of a second layer accommodating up to 16 channels. Central and fader modules each incorporate a 10.1 inch multi-touch display showing relevant configuration and operating parameters. Each SX2 unit is a standalone table-top device which can be chained with others to create a single mixing desk. SX2 features can be extended simply by adding optional license codes to the DSP core. This allows extra faders, busses and clean-feeds. Functions such as loudness metering, profanity delay and talkback to other DHD mixers are also supported.

Stagetec Asia (www.stagetecasia.com) offers the latest audio technology for broadcast television and radio production, studio recording, music mastering and live theatre. Based in Cyberjaya, Selangor, the company also established and operates the Stagetec Media Academy for technicians to enhance their skills with professional training and seminars.