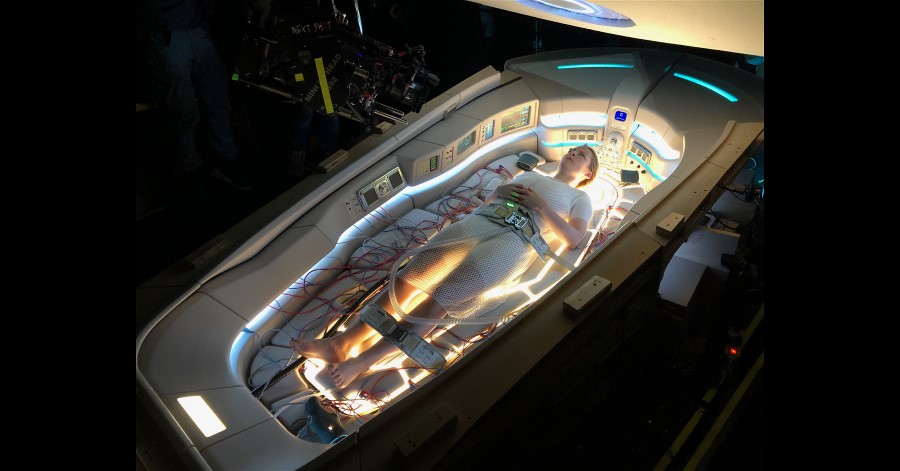 Paris, October 21, 2021 - When it came time to record the Netflix original French-language film, Oxygène (Oxygen in English), the audio team had quite the challenge in front of them. The premise of the scientific horror film focuses on a scientist, played by French Actress Melanie Laurent, who has lost her memory, awakens, trapped in a medical pod and must find her way out before the oxygen levels diminish. Given the setting, the pod is used for 90 percent of the film and, with its tight quarters, Production Sound Mixer Ken Yasumoto and Boom Operator Josselin Panchout knew they needed a reliable and unobtrusive microphone solution, which they found in DPA Microphones.

Having small, portable, easy-to-use tools became even more important when the film’s Director Alex Aja and Director of Photography Maxime Alexandre built a second pod for ease of filming some of the tighter shots. Although there were two sets, the team utilized only one video/audio production kit, which required them to frequently move gear from one location to the other. Fans of DPA from previous work, Yasumoto and Panchout decided to primarily utilize the brand’s 6060 CORE Omnidirectional Subminiature microphone for the film because of its diminutive size and discreet yet powerful presence on the narrow set. They also deployed DPA’s 4080 CORE Miniature Cardioid and 6066 CORE Omnidirectional Headset microphones for the film.

Panchout explains that he outfitted a pair of 6060s with Bubblebee lavalier concealers, designed specifically for the 6060. Wardrobe then used a tube to run the lavalier’s cable along a seam on Laurent’s top, which was made of fishnet material. On the other end, Yasumoto used a cable to plug the mics directly into the main pod, which was specially designed to include an active microphone jack. This, he says, ensured consistent, quality sound versus using it as a wireless option.

“It was a great help to hide the mics in different positions,” he adds. “It’s why I typically also use DPA’s 4060s with a lavalier concealer. Even if you have no time to find the best position for it to go in clothes, you can just take the lavalier concealer and put it inside as fast as you can with tape on it and it will work in every position.

“When we filmed her [Laurent], she spent a lot of time inside the main pod’s dome, which was made of plexiglass,” Yasumoto continues. “This material caused some strange acoustics and reverberation, especially with the air volume adjusting as we opened and closed the pod. In the end, the DPA mics that we used were the perfect solution for this job.”

In addition to the body worn solution, the pair also modified a 4080 microphone, removing all the foam and wrapping it around a WireRig from Ursa, to affix it to the top of the pod for various scenes in which the boom could not be used. Panchout explains that “this was the only solution as some lights above the plexiglass dome were reflecting onto Melanie’s face,” which made it challenging to use a boom mic during filming. Additionally, it was physically difficult to boom while the camera was moving. Therefore, the DPA mics, most especially the 4080, provided the support necessary to ensure the sound was captured on both ends.

Meanwhile, DPA’s 6066 was used for one particular sequence where Laurent was not in the pod, but in a flash-forward scene, speaking in a conference room. Since this was set in the future, Aja and the Production Designer, Jean Rabasse, requested a more futuristic-looking mic, for which the sound team suggested the 6066. “They both loved the look of the mic, but we also still used the 6060 as a back-up to the audio capture,” explains Panchout. “So, we hid two transmitters in Melanie’s wardrobe, one for the 6060 in her shirt and the other for the 6066 headset.”

Yasumoto, who also worked on the film’s post-production, said that one of the biggest benefits to using DPA microphones was that the sound was very natural, even if it was a bit different than the sound of the boom mic, which was not a DPA. “DPA mics are just easy to use in post,” he says. “On some sequences, we used only the DPA mics and, while you have to do some EQ, you can have a natural sound that folds well into the recordings from the other DPAs, as well as the boom mic.”

Oxygene made its debut on Netflix in May 2021. Director Alexandre Aja is best known for his French horror film High Tension and crocodile thriller Crawl.