DPA Microphones: Philadelphia Meteorologist returns to the Studio Sounding better than ever. 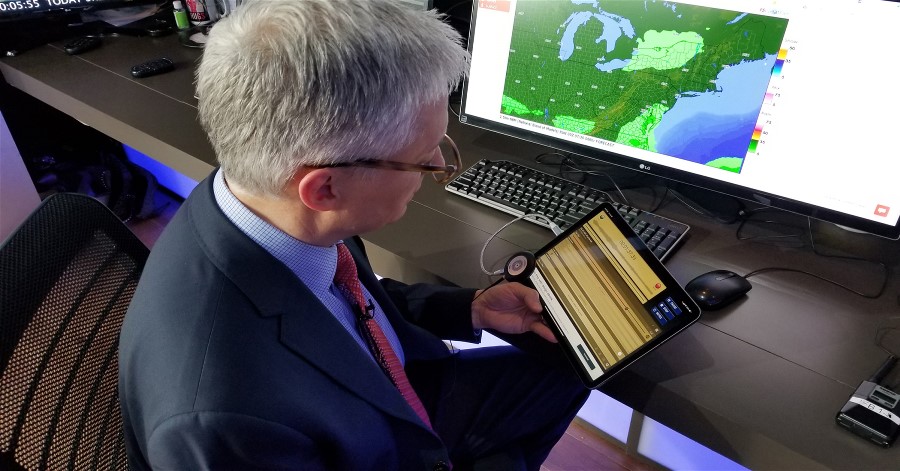 Philadelphia, August  17, 2021 - When the COVID-19 pandemic hit, television and radio stations across the country scrambled to find ways to keep delivering the news while maintaining the health and safety of its employees. For Philadelphia’s NBC10 WCAU, that meant having their staff work from home. With this change in location, the station’s legendary meteorologist, Bill Henley, had to find an audio solution capable of delivering studio quality sound for his much-needed weather reports. Henley found the solution he needed for live weather broadcasts in the 6060 CORE Subminiature Lavalier and MMA-A Digital Audio Interface from DPA Microphones.

As vaccinations became readily available and the country began to return to some semblance of normalcy, Henley was eager to find out how his DPA gear would perform back in the studio setting. “I was excited to get back into the studio and see my coworkers,” says Henley. “I was also eager to see how I could transition into the studio with the DPA gear that I used from home during the pandemic. After speaking with my engineers, they all agreed to give the DPA 6060 CORE lavalier a try. The crew was just as impressed as I was with the sound quality of the mic. DPA microphones are top-notch, with clearer sound and superior accuracy, and I am so happy that I can continue to deliver that amazing sound quality in the studio.”

In addition to his NBC10 television weather reports, Henley also does the morning drive-time weather on KYW Newsradio 1060AM. “During the pandemic, KYW started simulcasting on an FM radio station, which raised the bar for sound quality needs,” he adds. “When I do radio updates and recordings for KYW, I’ll do it on my iPad. The 6060 CORE microphone in conjunction with the DPA MMA-A digital audio interface allows me to get that studio quality recording directly on my iPad. Since it records on a mobile device, it allows me to quickly email those recordings right to the radio station. While you might not think about using a lavalier microphone for radio, the clarity of the 6060 CORE makes it a great choice. Additionally, since I use the same set up for both WCAU and KYW, it means that the voice people hear on television is the same voice that they hear on the radio. I’m not switching to another microphone that colors my voice differently on the radio, which I really like.”

According to Henley, DPA’s microphone clips are also of superior quality and design. “Though they don’t affect the sound, the clips are an important element to consider when choosing a lavalier. Most clips are not fabric friendly, and the manufacturers do not put much engineering into them. That’s not the case with DPA. The company does an excellent job designing a variety of solutions that stay in place and don’t affect the fabric. I can clip a DPA mic to even the finest silk tie, and it’s not going to ruin it. So, my reason for using the 6060 CORE in the studio is twofold: one, is obviously for its audio quality and clarity, and the other reason is for its superior mic clip.”

When the pandemic first hit, Henley reached out to DPA for assistance with his at-home setup. “Gabriel Antonini [DPA Business Development/Global Support Manager] put together an audio solution for me to use at home,” he explains. “I had no idea it would sound so good that I would decide to bring the mic back with me to the studio. DPA’s 6060 CORE is an outstanding microphone, and the MMA-A digital audio interface is designed and sounds so well that NASA sent it to Mars. The combination of DPA gear that Gabriel put together is perfect for our needs. In my world, job number one is being understood, and having the right microphone makes a big difference. DPA is a game changer.”