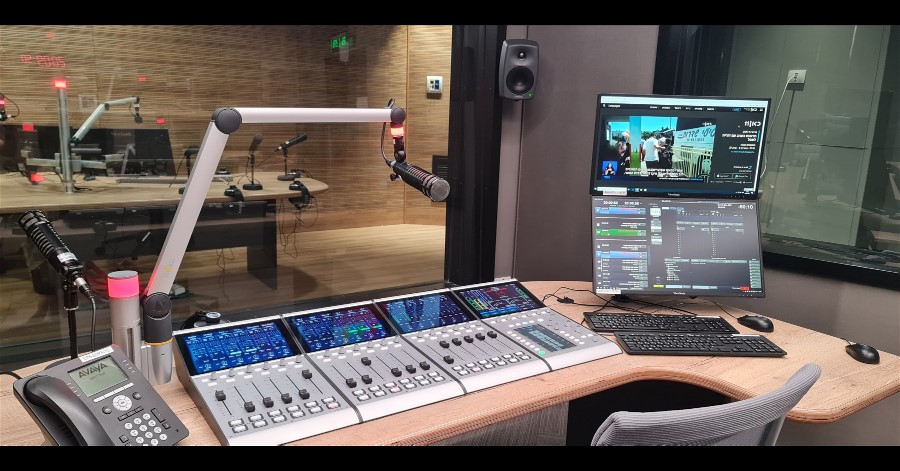 DHD Audio GmbH announces the completion of a new audio studio installation for the Israeli Public Broadcasting Corporation, Kan. A Series 52 18-fader RX2 console, a DX four-fader desktop mixer, four touchscreen-controlled Series 52 TX and an XC2 Core have been chosen for Studio 6. This studio completes the transition from Tel Aviv to Jerusalem and is one of more than 20 studios scheduled to be equipped with DHD Audio mixers. The project is being progressed by Jerusalem-based broadcast audio systems integration specialist Broadcast Design.

"This is one more step in the complete supply and installation of new state-of-the-art radio studios in four locations across the country," comments Micha Blum, Broadcast Design's founder and CEO. "DHD takes operational flexibility and customisation very seriously. Because everything is 'inside' DHD, it saves a lot of third-party equipment. The integral TFT screens mean there is no need for an external PC. DHD mixing systems are based on an Ethernet-linked core processor and input/output modules, typically located in the central apparatus room. They are reliable, flexible and fully customisable, scaling from a single-studio to multi-site network.

"DHD equipment scores especially high in terms of configurability, giving customers the freedom to add extra studios or include more inputs, outputs or faders during the initial build stage or at any desired time in the future. Audio performance and build quality are superb, ensuring long product life. DHD Audio's technical support team is fast and friendly. Another plus point is the ease with which we can integrate third-party products, including in this case telephone interview interfaces and playout automation."

"The installation specified for Studio 6 includes a technical control room which can also function as a self-op suite," adds Christoph Gottert, DHD's International Sales Manager. "DHD system infrastructure consists of an XC2 Core, an 18-fader RX2 console, a DX and four TX panels. The configuration comprises a production/editing/screening desk, a talks studio currently equipped for five guests but expandable to eight, and a DJ suite with two CD players and a DX panel plus a TX panel for the host and co-host. A TX-equipped news booth can also act as an editing booth. All user control screen menus for this project are in Hebrew text as our interfaces and configuration displays are compatible with Unicode standard character sets."

DHD's Series 52 TX is an ultra-compact tabletop touch-screen mixer optimised for daily operation in news desks, edit suites and satellite link vehicles. Measuring just 256 mm wide x 58 mm high and 272 mm front-to-back, it has a 10.1 inch IPS LCD monitor with capacitive touch-screen faders plus six hardware pushbuttons and two assignable potentiometers. Other features include an XLR microphone input, an XLR/6.3 mm jack combination headphone output, an integrated talkback microphone and a loudspeaker. The TX connects to the network via a single RJ45 port. The TX can be configured to operate as a communications controller with a full individual talkback system for the producer, or a control and monitoring panel for the host.

The DHD 52/DX is a compact desktop mixer with four 100 mm faders, a 7 inch multitouch TFT screen, two monitor-level control potentiometers, plus four colour-coded controls for direct adjustment of channel settings as well as EQ, compressor and auxiliary input levels. Operators can select from a variety of display pages to check parameters such as input settings, equalisation and dynamics. A typical DX system comprises the desktop control unit, a dedicated or network-shared processing core and a 48 volt power supply.

DHD's XC2 Core provides the processing needed to drive DHD control consoles with up to 44 faders capacity. Supporting up to 3,716 x 3,076 digital audio switch points, it occupies half the width of a 1U rack slot. Standard network cables and structured cabling can be used for the interconnection of DHD modules, dramatically reduce installation costs. Optional AoIP modules allow up to 128 channels of uncompressed bidirectional audio to interface with other AoIP-compatible devices via a standard Ethernet network. Monitoring, talkback and connection of remote facilities can all be performed via the network.