AEQ: IB3 Radio's production centers in the Balearic Islands refurbished based on the ATRIUM Console and AoIP. 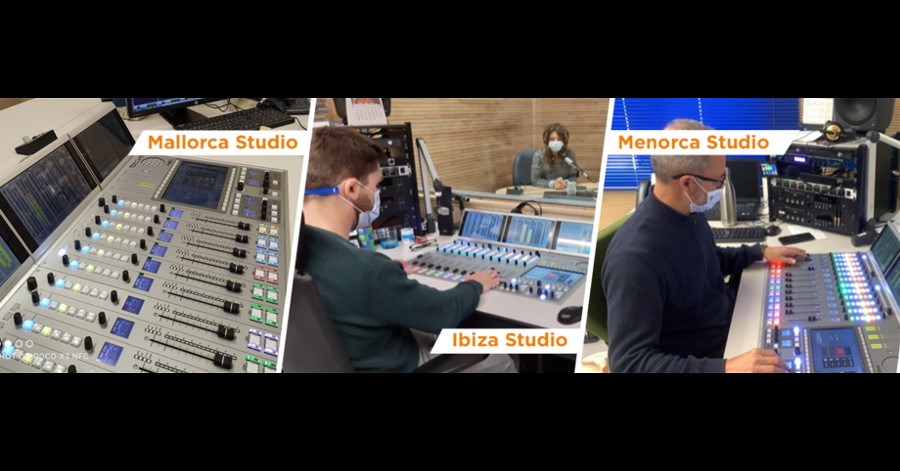 Following a public tender process, AEQ has been awarded the supply and installation of audio mixing consoles of the Baleric Islands of Mallorca, Menorca, Ibiza and Formentera.

IB3 Ràdio has been on the air since March 1, 2005. It has a production unit on each of the three main islands of the archipelago, a delegation on Formentera and broadcasts a basic programme with disconnections through a network of 11 broadcasting centres. It also produces podcasts and author programmes. Its main language is Catalan, especially using the Balearic Islands' own dialect, and its content focuses on culture, information, involvement and social integration, and the dissemination of its distinctive identity.

In 2004, AEQ was selected as the winner of the tender process that was launched for the initial equipment of IB3 Ràdio, and subsequently of other technical updating agreements based on the commitment to adapt the products to the specific needs of the users, while maintaining a competitive price.

This new public tender was launched shortly after the launch of the ATRIUM Console, a product specially designed to cover the needs of this type of production centers that demand top level consoles based on excellent technical quality, programming capabilities and that provide content production at very high work pace, especially in news production where the dynamic workflow is complex.

The tender specifications included the supply of three ATRIUM consoles for the Palma de Mallorca center, one for the main studio in Menorca and one for the Ibiza center.

Two digital consoles FORUM IP SPLIT with top-notch features have also been installed for the editing cabins at Palma de Mallorca, one in Menorca, one in Ibiza and another one  with additional features and Inputs and Outputs for the local station at Formentera. At this location it was necessary to make the provision for program production with an elevated number of microphone channels.

Also, two Systel IP 16 talk-show systems have been supplied to handle the broadcast communications for the Menorca and Ibiza studios. AEQ also provided the bespoke technical furniture for the new mixing consoles, including a very aesthetically pleasing studio desk for the main studio in Palma de Mallorca. This has been designed and prepared to encompass Visual Radio broadcasts.

The delivery has been designed as a turnkey schedule that provides networked audio connectivity over IP, with analogue/digital backup in all Production Centers, for which some additional components were added:

Managed network switches, to run the local audio and control networks in the studios, a Dante IP audio connection card to connect to the consoles in Palma de Mallorca 64 audio channels from the existing AEQ BC 2000D matrix switcher, monitor speakers, amplifiers/headphone distributors, audio line, microphone and headphone connector panels, and patch-panels for the backup audio connecting the matrix to the consoles in parallel with the IP audio.

Operational readiness training have also been undertaken at each location to coincide with the commissioning of each installation and comprehensive maintenance service.

Each ATRIUM console has 3 modules of 6 motorised faders in each one. Associated to each fader module there is a touch screen module that displays up to three pairs of VU meters for each of its six channels, according to configuration, for example one pair for the main signal, another for the return signal and a third for the alternative A/B signal. In addition, this screen allows contextual adjustment by gesture, mouse or encoder of the processes applied to each channel.

The engine of each of the consoles supplied has a controller and redundant power supply, as well as very extensive connectivity: inputs for 8 microphones, 8 analogue lines, 8 AES/EBU digital lines, 64 MADI digital lines and 64 audio over IP in a choice of Dante or AES 67 format. Outputs are for primary and secondary headphones, 12 analogue lines, and the same number of outputs as inputs of the other types.

The ATRIUM console in the main studio in Palma de Mallorca has some special features for developing more complex programmes:

A second control and monitoring module, programmed specifically for the use of the producer, a person who supports the console technician, preparing content, organising telephone calls, coordinating the mobile units and other resources, such as intervening on air in sports programmes, providing information and data on the events taking place in real time.

For this reason, the programming of its specific control and monitoring module allows for simplicity in monitoring for all the console input and output signals, as well as the intercom or talkback with all the local guests that are participating in a programme.

It also has an additional microphone card, which along with the other two, totals 12 microphones and two specific headphone outputs, and an additional AES/EBU card, totalling 12 AES/EBU digital input and output lines.

Main features of the Forum IP consoles in the cabins

Each FORUM IP console in the cabins has a 4 fader module. It also has a control and monitoring module with 20 programmable keys, plus precision VU meters, external CUE speaker-bar, control and paging monitoring sections and intercom section. It is provided with an external touch screen with two applications, FORUM Screen to facilitate the operation, including Vu-meters, correlation meter and screens to facilitate the programming and execution of processes. On the same screen, there is a VIRTUAL Forum for PC replication of the console control surface.

The engine of each of these consoles has inputs and outputs for the user's microphone and headphones, 8 analogue lines, 4 digital AES/EBU lines, 4 stereo USB and 32 audio over IP Dante or AES 67.

The console FORUM IP of Formentera has extended features as it works as a studio for both live and recorded programmes with guests. It has 3 modules with 4 faders. It also features the control and monitoring module, the external CUE speaker-bar, the external touch screen with the two applications: FORUM Screen and Virtual Forum.

The engine provides more Inputs and Outputs compared to the other FORUM IPs installed at the other stations in the network: It has inputs and outputs for 5 microphones and two pairs of headphone signals – control and studio. It also counts on 8 inputs and outputs for analogue lines, 4 AES/EBU digital lines, 4 stereo USB and 32 audio via IP Dante or AES 67. Further, it features two specific, integrated digital telephone hybrid cards, minimizing cabling and allowing for talk-show / phone-in participation through the programmable keys of the console.

The realisation of this project took place in the last months of 2020 and the first months of 2021 in parallel with the acoustic refurbishment of all the studios. The basis of the scope of work consisted in keeping the services active during refurbishment, installation and setting up of new equipment and as per general time-lines.

The entire project was been led by the sales manager of AEQ for IB3, Mr. Bernardo Saiz, in coordination with the technical services of IB3 Radio. We consider that the result meets the requirements of high level of performance and robustness necessary to provide the quality service required of a public autonomous channel. It should be able to meet the qualification of "reference installation", possibly the most complete and technically up-to-date installation developed in Spain in recent months.