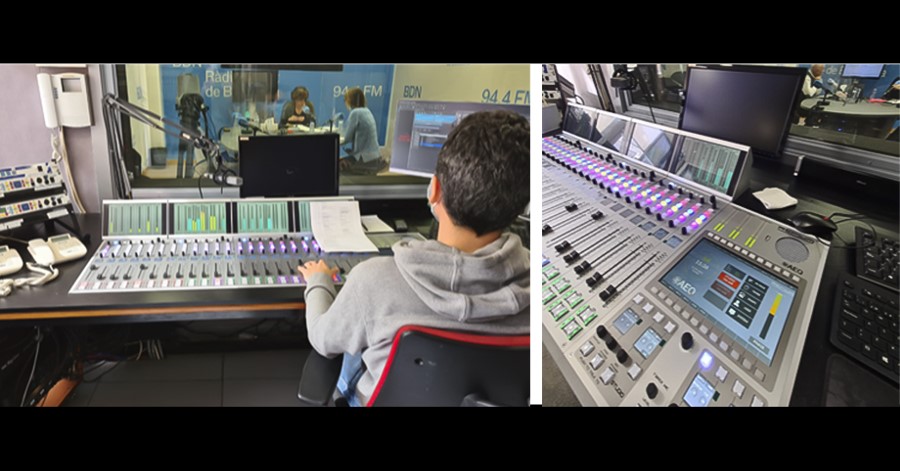 Badalona Comunicació is a Public company depending on the Badalona’s Council. Located 10 km to the North-East of Barcelona, Spain, Badalona has a population of more than 200,000 people. Badalona Comunicació manages three communication media: written press, radio and television.

BDN Radio Ciutat de Badalona is Badalona Comuniació’s radio station. It was founded back in 1981 and broadcasts 24 hours a day, 7 days a week at the 94.4FM dial and through Internet. Its contents are composed of music and, mostly sports, paying special attention to local events.

Radio Ciutat de Badalona is a traditional AEQ customer, and in 2019 they initiated a deep renovation of their technical infrastructure which supposed the migration of most audio connections towards IP-based formats, transported on managed packet-switching networks, as well as the installation of the AEQ CAPITOL and AEQ FORUM digital mixing consoles in their production studios.

Now, in 2021, Badalona Comunicació has decided to upgrade their main broadcasting studio, which was formerly based on an AEQ ARENA-BC2000D digital mixing console, to install ATRIUM, the most powerful mixer develop by AEQ to date. 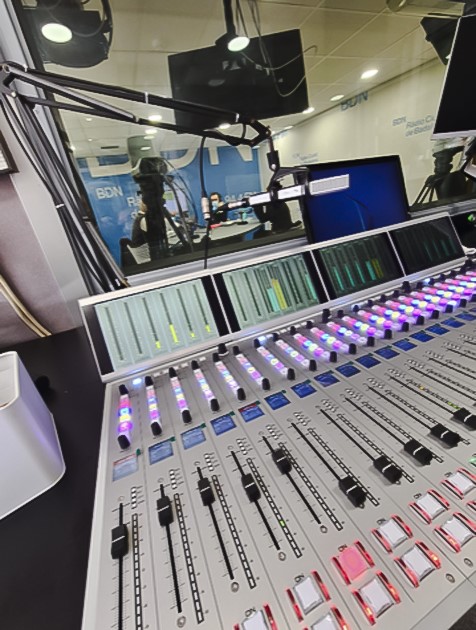 AEQ ATRIUM is specially designed for broadcast audio production for Radio and TV in the most-demanding operating environments. It can handle up to 1000 local or IP audio channels, operated on one or more control surfaces, with up to 96 powered and page-organized faders each.

Developed with the user always in mind, AEQ ATRIUM provides great operation simplicity by means of a powerful set of touch screens, rotary encoders, indicators and keys which can be pre-configured and which function may dynamically change according to the context, avoiding unnecessary steps and always keeping the required information at sight, so the operation is simple and, at the same time, safe.

AEQ ATRIUM was created taking advantage of all the improvements that current technology provides: audio over IP systems allow for inputs & outputs and the processing and control elements to be distributed among several equipments, which are sometimes physically far away from each other. It incorporates tools to develop redundancy capabilities at all levels, instant storing and retrieving of snapshots, convergence of physical and virtual control elements, mixing and level adjustment automation, control input and output signal transport over the several devices comprising a system, etc. All these state-of-the-art features generate a new concept where the sum of the different components is able to develop a combined functionality by far superior to that of each individual part.

Each AEQ ATRIUM control surface can be completely customized. This way, classic operation can be implemented: for example, each fader may have A/B signal configuration, or each channel may have direct access to pre-defined sends and buses; it is even possible to define signals that take part on bi-directional multiplex groups, so each user is provided with the total mix, except for its own contribution.

Also, mixed or very special operating ways can be configured, with flexible programming for each key so it can act on the console routing, control external devices such as routers, audio-codecs, broadcast telephony or automation systems. Also, ATRIUM is very easily configured and integrated into a system which already covers not only the production centre, but it can also be expanded to connect to external events and other locations, so audio networks of any required size can be created.

Mr Jordi Coloma, CTO at Badalona Comunicació, remarks: “The migration from our former ARENA digital audio mixer to the new ATRIUM system was performed in, literally, two afternoons and, as most of the already installed hardware could be re-used, so now we have a latest-generation console yet with minimal investment”.

The complete project has been leaded by AEQ Sales Area Manager for Catalonia, Mr. Nacho Olivella, in coordination with the technical services of Radio Ciutad de Badalona.