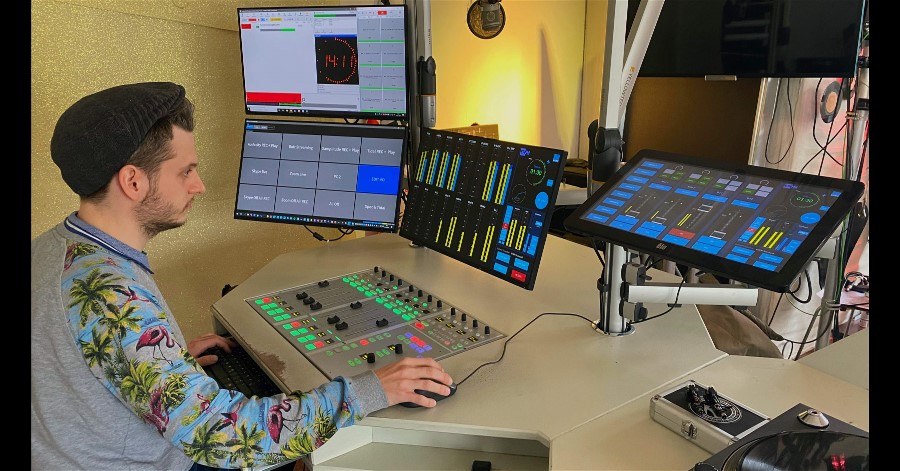 674FM, the independent Internet radio station operating in Cologne, Germany since 2013, provides adventurous listeners with very special music programming that’s far from the mainstream. Every month, 130 “program makers” stream more than 100 live programs from the in-house studio, festivals, public events and other places where culture is created. Demand for new content is high, and when their continuously growing number of broadcasts dictated new radio equipment to handle the load, the non-profit association decided to modernize with radio solutions from Lawo.

"We decided in 2016 to set up professional technical structures" explains Karl-Heinz Müller, the station’s Chairman of the Board, and the person responsible for the station’s technical expansion. 674FM needed their new equipment to be flexible, reliable, easy to learn and operate, and above all, sustainable. After intensive research, they chose Lawo’s ruby radio console, an award-winning mixing console that has become a favorite of broadcasters worldwide thanks to its sleek, uncluttered design and ability to easily adapt to changing workflows. An adjacent touch screen provides program makers with the ability to control various features of the ruby mixer using Lawo VisTool, an advanced vector-graphic GUI that gives easy access to mixing, EQ & dynamics controls, and other software features via intuitive graphical controls. The ruby mixer controls a state-of-the-art Lawo Power Core mixing engine, a 1RU DSP mixing engine with the ability to handle large amounts of analog, digital and AES67 networked audio sources.

“This initial expansion has significantly improved and facilitated work in the studio within a short period of time,” says Müller. “Now our presenters can quickly hand the studio over to the next person using console snapshots that quickly load customized workflows. Remote switching, using codecs and VPN, ensures delivery of feeds into the ongoing broadcast program, so that even despite restrictions made necessary by the Corona regulations, broadcasting operations can be maintained by switching between home studios.”

The station has no shortage of future plans. “First, we will equip another room for audio and video editing. And since we are very well connected to the music and cultural scene and regularly broadcast small radio concerts as well as talk shows from the studio, a concert and event space would be a logical step. And because Lawo’s systems are easily scalable, we know that upcoming investments can be seamlessly combined with our existing hardware and software,” Müller notes with satisfaction. “And besides all of this, we are very impressed by the sound of the console!”

Sustainability in operator’s and broadcaster's infrastructures.