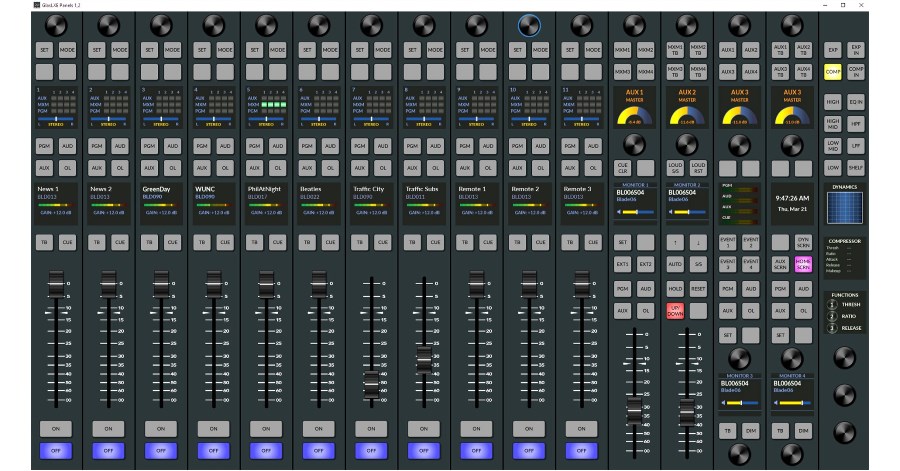 Remote LXE mirrors the LXE hardware surface as a fully functional and studio-ready user interface, complete with like buttons and knobs as well as familiar navigation and menuing options for setting EQ curves, filtering and other custom settings.

Working in conjunction with the LXE hardware surface, Remote LXE provides complementary production functions for separate operators using an LXE board in the same location or in another location over an IP connection. Real-time fader tracking and live synchronization of buttons and controls between the virtual surface and the physical LXE board offer an independent, yet shared user experience for multiple operators – or as a tool for engineers to remote in to correct operator setup issues.

The LXE console is known for its advanced flexibility as a reconfigurable, compact board that is available in one frame or in a split-frame configuration. It can be configured for up to 32 physical motorized faders, with full DSP processing available on each. Physical controls such as buttons and knobs on the console can be user defined using a simple menu interface. LXE is the flagship IP audio console for the WheatNet-IP audio network, a complete IP audio ecosystem of consoles, talent stations, I/O units, accessories and SIP phone and codec distribution appliances.

Remote LXE is one of several new WheatNet-IP additions this IBC, adding to the hundreds of software and hardware elements that make up the WheatNet-IP Intelligent Audio Network, any of which can be connected together for any sized operation or purpose. WheatNet-IP is a complete AoIP infrastructure that includes AES67 compatibility.

This and other WheatNet-IP audio network products will be demonstrated at stand 8.C91 during the IBC conference in September.