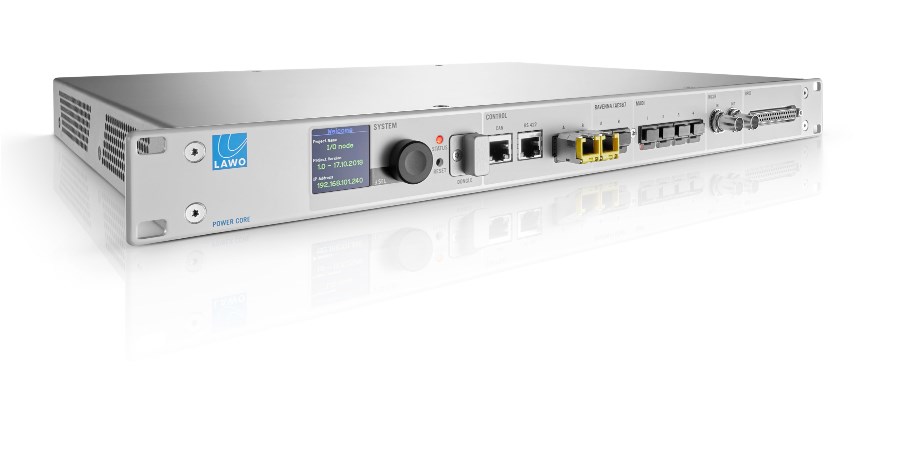 Rastatt, August 4, 2019 - Power Core may be the most powerful DSP mixing engine ever conceived for AoIP networks. In addition to giving users incredible amounts of processing, routing and I/O capabilities, Power Core has 96 available DSP channels and the capacity to handle hundreds of analog, digital and AES67 audio signals.

“With the Power Core MAX license pack, a single engine can be controlled by more than one mixing surface,” says Lawo Radio Marketing specialist Clark Novak. “Project managers are excited about the ability to support two, three, and sometimes even four mixing consoles. This makes Power Core MAX perfect for large multi-studio projects, but broadcasters with medium and smaller facilities can use it as the I/O gateway and mixing engine for an entire radio station! There’s nothing else like it.”

Power Core is the very definition of flexibility. Customers can choose from a number of license packages tailored to a variety of operational needs and price points. The new MAX package allows connection of as many as four independent Ruby mixing surfaces to a single Power Core engine — a unique ability perfectly suited to today’s multi-studio radio facilities.

All of these capabilities are packed into a compact, space-saving 1RU chassis.
Introduced as a DSP mixing engine and modular I/O system for Ruby radio consoles, many broadcasters are now using Power Core as a gateway between legacy audio formats and standards-based IP media networks, thanks to its abundant I/O capacity and a flexible license set that helps tailor capabilities to clients’ workflows.

IBC Visitors can see Power Core MAX, along with the entire line of advanced Lawo radio, TV and live-sound products, at the RAI Center in Amsterdam 13-17 September, Stand #8.B50.