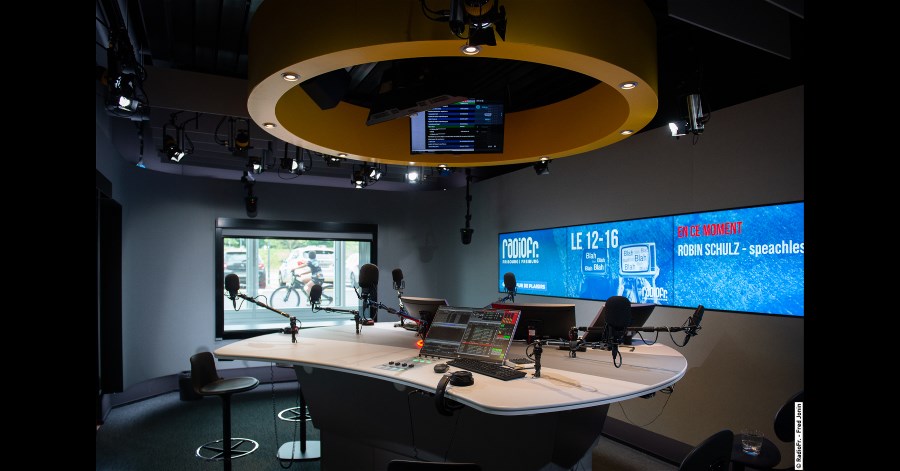 SLG Broadcast, who have worked with RadioFr for more than 15 years, was retained to design and construct the new broadcast facilities. SLG was responsible for the MEDIAParc concept, project planning, installation and commissioning. A complete review of both IT and broadcast technologies was undertaken to make certain that RadioFr took full advantage of the synergies provided by an IP-based studio environment. Standards-based networking was specified, with AES67 supported for audio and SMPTE 2022-6 for video.

Equipment from many Lawo product lines – Radio, video and live audio – was used to give RadioFr the operational flexibility demanded by their workflow.

• The Radio Fribourg and Radio Freiburg main studios each feature a 12-fader Lawo Ruby as the main mixing console, with another 4-fader Ruby for the News position, with custom control screens designed using Lawo VisTool GUI builder software.
• Three radio editing booths are equipped with 4-fader Ruby consoles and VisTool displays, all powered by a single, shared Lawo Power Core DSP mixing engine.
• A comprehensive radio production suite contains a 12-fader Ruby with Power Core engine, accompanied by a Lawo mc236 live performance mixer which can be relocated to other performance rooms as needed for mixing live performances by musicians and special studio guests.
• For La Télé TV programming, a Lawo V_matrix8 provides video IP routing, processing & multi-viewer services, all managed with Lawo VSM software and hardware control panels. Another Ruby control surface with Power Core DSP engine is used for sound mixing; two Lawo V_remote4 units provide IP connection between MEDIAParc and the main TV studios in Lausanne.
• The facility’s technical core ties together Radio and TV audio operations, and is equipped with its own Power Core engine and VisTool GUI control. A Lawo Nova audio router is used to provide MEDIAParc’s sophisticated talkback matrix; a second Nova router is used to mix playout, codec and telephone sources for the station’s OB van.
• MEDIAParc was designed to facilitate content production for Internet distribution. Its all-IP infrastructure grants easy access to signals throughout the facility for use in producing podcasts and other social media content.
• The OB van is equipped with a 12-fader Lawo Sapphire mixing console for mobile broadcast events.

To enhance the sharing of audio between TV and radio operations, fiber-optic cables connect all areas. Audio from the TV studios are easily available for radio production, while cameras installed in the radio studios for Visual Radio services can also be accessed by the television production crew. Shared functions – such as studio talkback, master clocking, monitoring and phone codecs were centralized in the tech core for full-facility use.

The Audiomatrix, the heart of MEDIAParc’s operations, is what makes this audio sharing possible. Connecting all broadcast resources, the Audiomatrix gives operators access to Program output buses for both Radio Fribourg and Radio Freiburg, plus auxiliary mixing busses for performances, rehearsals and other special needs. For flexibility and redundancy, twin, interconnected Audiomatrix sections run in parallel: radio and TV studio feeds, plus the Lawo Nova routers, playout PCs and phone systems are connected to Audiomatrix #1 via MADI, and to Audiomatrix #2 via AES67 — making it possible to switch audio seamlessly between studios.

The Audiomatrix also has access to outputs from all three editing studios and a remote feed from the RadioFr OB van. Codec Control software from SLG unifies selection of codecs, phone hybrids and studio feeds, enabling OB talent to remotely access in-house codecs without need for an operator in the main studio.

Another feature unique to MEDIAParc is an audio production setup tailored to the needs of show hosts with impaired vision. Lawo RƎLAY VPB Virtual Patch Bay software, running on audio editing PCs, is programmed to automatically send audio to either the editing suite or one of the on-air studios while simultaneously switching the monitoring, recording and playout sections of the consoles as needed.

“MEDIAParc is the first all-IP mediahouse in Switzerland, and as such it represents the successful realization of an ambitious vision encompassing cross-media workflows,” says Marc Straehl, CEO of SLG Broadcast AG. “RadioFr wanted all-IP infrastructure for both radio and TV sides of the house. They wanted to virtualize the production environment, so that editorial PCs could contribute programming directly via the network. And they wanted standardized, future-proof solutions. As TV and radio stations share more and more resources, this type of seamless integration is what broadcasters require. Lawo’s standards-based technology, together with SLG technical know-how, helped make the RadioFr vision a reality! We look forward to the design and deployment of many more such projects in the future.”